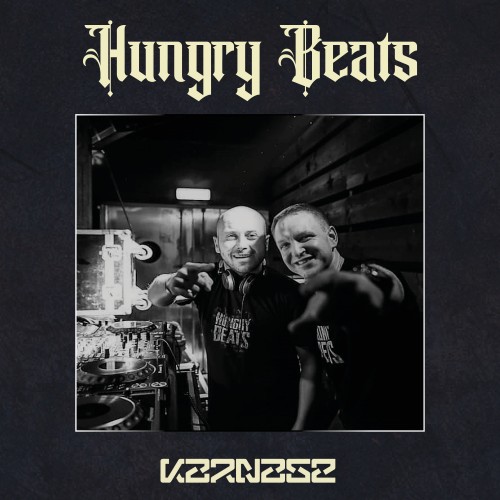 Born at the end of 2009, Hungry Beats project is defined by a dark and hard music, in the lineage of Hardcore, Frenchcore, Terror and Gabber. At the command of this duo: HDG and KRIST_OFF, who met within the Lettek Sound System in 2004.

In 2009, Dave LXR proposes to HDG to release on the label Lxrecords. Quickly Dave is interested in the Hungry Beats project, and the first release of the duo: Lost&Found 02, is born. In the same time the two friends create the label Prague Nightmare Records and release their first Ep: Out Of Bounds - which contains the main track: Crazy Elisa. The success is not long in coming and they create a real emulation throughout the Czech Republic.

From then on, Hungry beats redoubled their work and just 6 months later, they released their second Ep: Head Crusher (PNR 02), which will meet a worldwide success. This was followed by a booking at the X-Massacre party, the meeting with Sickest Squad (IT) and the project to make an Ep in common with the Italian duo. The machine is on!

The two friends then develop their label by producing in particular : Bad To The Bone, by Frazzbass and D-Tox /Subversion. They will also make a remix of the track: Soul vending machine.

At the same time, Hungry Beats is solicited by several foreign labels and a few months later, they release two Ep on the label Low Factory. Multiple propositions from labels such as: Noistorm (IT), GGM (UK), KARNAGE (FR), N.E. TUNES (IT) followed. In 2011, they found with Astrofonik production the labels Lycanthropy rec and Armory rec.

Bookings start to rain, and they play regularly all over the Czech Republic. Internationally, they are booked in the following events: RAVING NIGHTMARE, WE ARE TOGETHER HARDCORE, E-MISSION, FOOTWORXXX vs. PRSPCT, FRENCHCORE S.IL Vous PLEIT, THERAPY SESSIONS, X-MASSACRE, IMAGINATON FESTIVAL, to name but a few.

Stay tuned ! They're hungry and their beats will devour you !